YOUR STORY. OUR MORGAN COUNTY.

Seventy years later, the Mooresville Veterans Memorial continues to honor brave men and women who gave their lives to protect the freedom we enjoy today.

Mooresville Veterans of Foreign Wars (VFW) and American Legion posts will recognize the 70th anniversary of the Mooresville Veterans Memorial this Sunday, November 11, at 11 a.m. The memorial is located at the corner of Monroe Street and Memorial Drive on the Newby Elementary School campus.

When the Memorial was built in 1948, it was part of a greater community project which included the re-naming of Memorial Drive and the creation of a track, football field and baseball diamond on what was then the Mooresville High School campus. It included names of Mooresville’s citizens who gave the ultimate sacrifice in service to their country during World Wars I and II. The Memorial was also built as a permanent tribute to the fallen and to help replace the community’s Honor Roll Wall which stood in downtown Mooresville throughout WWII but became weathered and unable to save. 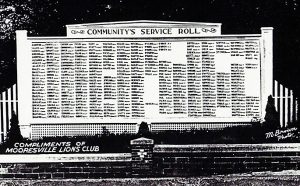 The Mooresville Lions Club raised funds to build the Community Honor Roll. In 1944, before weather and age further eroded the wall, a Bloomington (IN) photographer
stopped and shot this photo to ensure names were not lost.

In 1976, the Memorial was re-dedicated with the addition of local soldiers who died in Vietnam and Korea. In 2008, the Memorial was expanded to include names of those who perished in the War on Terror as well as a tribute to Mooresville High School graduate Sammy Lee Davis. He received the Congressional Medal of Honor for heroism in Vietnam. Davis is known as “The Real Forrest Gump,” as the video in the movie utilized Davis’ own Medal of Honor ceremony and the story of Forrest’s bravery in Vietnam is loosely based on Davis’ own heroism.

The Memorial has also expanded to include bricks purchased in tribute to veterans as well as benches honoring the branches of military services, a monument of the Pledge of Allegiance, and a stone with the inscription “All gave some, some gave all.”

All of us can do our part to honor local men and women who faithfully served our country. Donate to the Mooresville Veterans Memorial Fund or purchase a tribute brick through the Community Foundation of Morgan County (CFMC) at www.cfmconline.org. Tribute Bricks ordered by April 1 are installed by Memorial Day.

Want to join the discussion?
Feel free to contribute!

Your Story. Our Morgan County.
Scroll to top